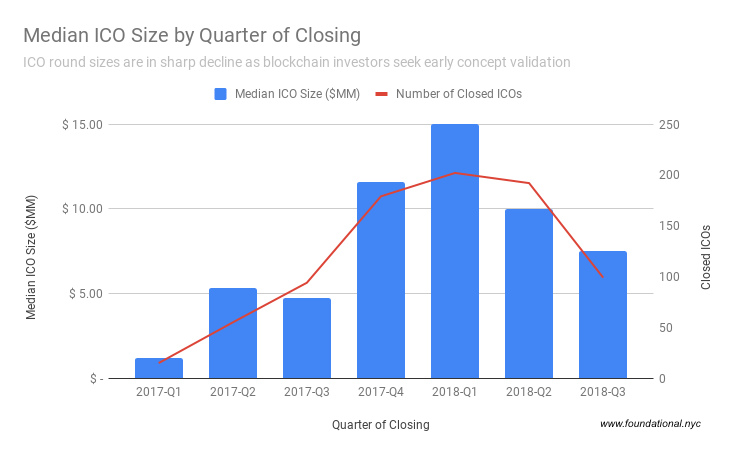 In Q3, ICO markets finally developed a demand for traction.

The ICO market has experienced a sudden cultural shift that has left concept-stage blockchain founders grappling with the same increased demand for evidence of traction that has long stymied founders trying to raise capital in traditional VC markets. The median ICO dollar size and overall volume of deals have dropped by half since a peak in Q1 of 2018.

Pressure for earlier validation has mounted from their blockchain peers as well. At cryptocurrency conferences, technologists from established initiatives have been exhibiting an ostensible lack of acceptance for concept-stage projects. Blockchain thought leaders openly share their consensus view that projects launching large public ICOs, without any proof-of-concept or market adoption, are drawing negative attention to the entire cryptocurrency movement.

Panelists and participants on the floor seemed to share the opinion that a certain era — the era of raising epic amounts of money with little more than a white paper has come to an end. — Brady Dale

Coupled with the rapid shifts in the ICO market, this dynamic poses a significant challenge to founders seeking access to the crucial expertise they need from the blockchain community to confidently satisfy their would-be investors’ traction expectations.

We’re experiencing a regression toward the mean

The fact that the ICO market expects more traction should not surprise anyone who’s been closely watching the space. Of the 89 tokens that began trading in Q1 of 2018, 82% concluded the quarter lower than their ICO price. Of the 412 all the Q1 ICOs staged, just 47% of them had any kind of software developed prior to their initial offering, and a paltry 26% had produced a minimum viable product! Looking back to the outcomes of the 2017 vintage of ICOs, as many as 59% of all attempted ICOs either never closed, or the projects were abandoned since their funding.

The trend towards smaller initial rounds of capital backed by some signals of product-market fit will sound familiar to anyone who has been involved with the seed-stage venture capital market over the past few years. Market forces have caused seed rounds to balloon to $2.2MM from $850K since 2012, while overall deal volume has declined by roughly a nearly inverse ratio. With those larger round sizes came higher pre-money valuations, and therefore also increased traction expectations.

“The most interesting teams are raising less than $10 million,” Ryan Alfred, co-founder of Distributed Global, said, pointing to projects like FOAM and Livepeer, which have progressed quickly on relatively small ICO raises. — Are Big Crypto Token Sales Really over?

While traction demands have been steadily increasing in traditional venture markets over the past decade, this change has come rapidly to the nascent ICO market. I suspect we’ll see the volume of funded ICOs continue to drop, and the median deal size to continue its decline until reaching levels similar to startups raising Regulation D seed rounds. At the present rate of change, this could occur by the end of the year.

How Blockchain Startups are Reacting

The hype that led investors to back early concept-stage ICOs was rooted in a belief that blockchain-based technologies would become a platform for the next generation of computing, and one whose widespread adoption would create billions and billions of dollars in value. Cryptocurrency commentator John Gabriel captured this sentiment well in the early days of the now record-setting EOS $4.1 billion ICO: “EOS is an unproven platform. The team behind it is quite capable and reputable… but EOS remains a promise. The infrastructure is still being developed and until we can experience the great promise, it is best to practice a wait-and-see approach. For the risk-takers, this is a perfect opportunity to be part of the early stages of a cryptocurrency which even though quite risky, hold great promise of mega-profits.”

While an expectation for evidence of product-market fit means that the time of the large concept-stage ICO has passed, but what was the case before, and will remain the case going forward, is that a belief of eventual mass adoption is critical to successfully raising capital. Aside from setting smaller funding targets, one notable emerging strategy is: building a proof of concept, then offering the solution’s initial tokens only to those who participate in its early usage, then a smaller private ICO to strategic investors, and finally a public ICO to the broader population of blockchain investors.

This is a thing of beauty because when the public offering eventually takes place, demand has already been demonstrated, questions about functionality have been resolved, and the token price, along with the likelihood of success, is substantially higher as a result.

Harlan Milkove is a repeat VC-backed startup founder, and Managing Partner at Foundational where he works with early-stage startups to expedite their pursuit of venture capital. His prior venture Reonomy, a commercial real estate analytics platform, has gone on to raise $125M+.

Our perspectives, learnings, and insights on traction, venture capital, and product management.